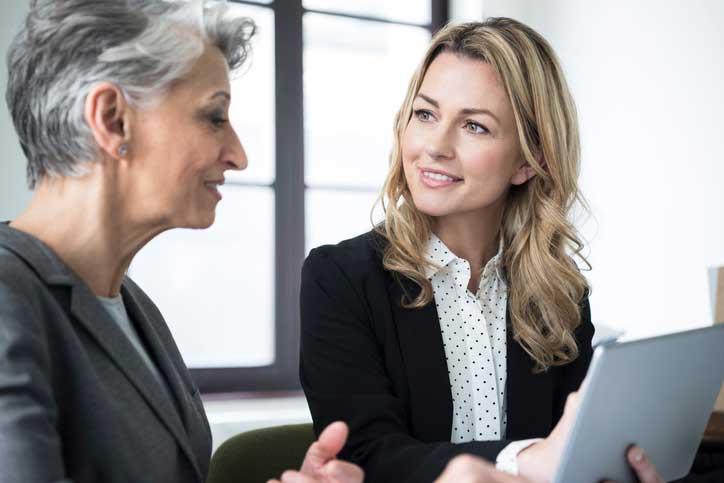 To investigate whether it was possible to determine leadership style differences between different functions, a survey was conducted with the LSI leadership style inventory, where managers were grouped based on their function. The functions used were Chief Executive Officer (CEO, President), Production (for example, Production Manager, Factory Manager, COO), Sales (for example, Sales Manager, Sales Director) and Finance (CFO, Audit Manager, Controller). The average differences between these four functions were as follows: 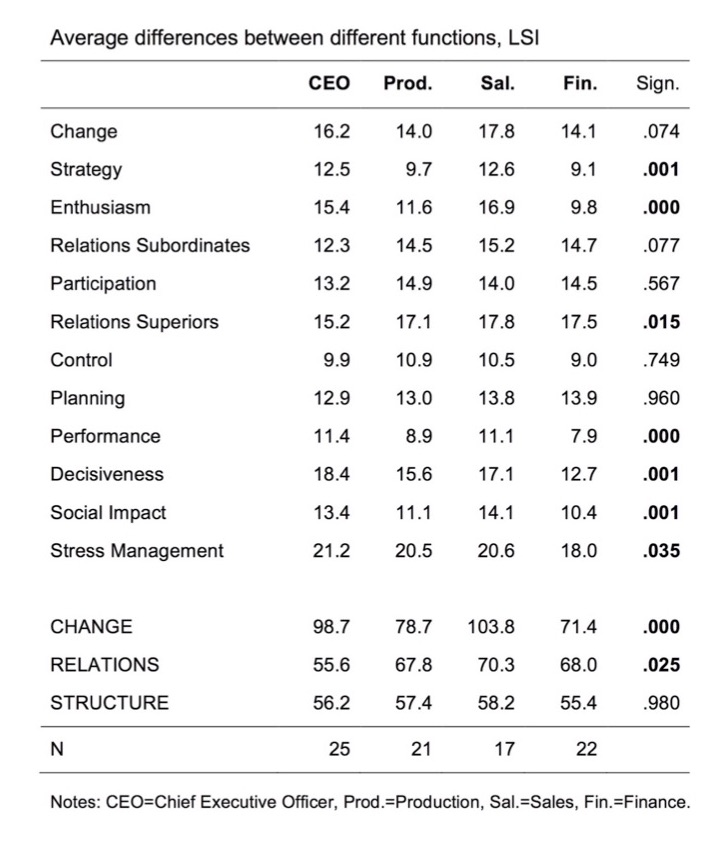 In further analysis, the average value differences were examined in more detail. It appears that the Change dimension is higher among CEOs and sales managers, compared to managers of production and finance. On the other hand, CEOs and sales managers are not significantly different when it comes to the Change dimension, and, in addition, production and finance managers do not differ significantly.

As can be seen in the table, the groups differ in the Additional Scales. In particular, managers in finance get low values ​​on the scales. This points to the fact that managers in finance often show relatively lower motivation and confidence in managerial tasks.

As suggested earlier, the groups are small, and the conclusions should be seen as preliminary. Maybe there is especially much to do for leadership developers in the finance function. One may wonder if the low values ​​can be explained by the fact that finance managers often have small management teams because they are in a staff function and leadership is not considered as important as for many other managerial roles. The employees are often well educated, relatively independent specialists.

Recruiters can note the importance of the Change dimension for CEOs, and also for sales managers. CEOs also combine Change with lower values on the dimension Relation-oriented. They describe themselves as more Independent (task-oriented and unsentimental/”tough”). 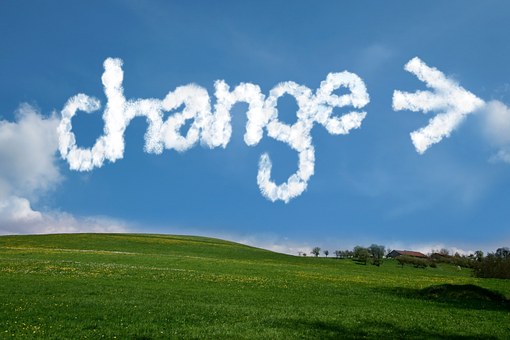 What leadership is required for restructuring?

The survey was conducted in a major Swedish company during a pronounced and extensive period of change. About 40 managers had to complete a modified requirement analysis twice. In the first requirement analysis, the managers stated how they felt about demands on their leadership style until the present. In the second requirement analysis, they stated how they felt that the demands on their leadership style would be from this point forward. A 10-degree scale was used for the assessments, in which the measurement scales’ dimensions corresponded to the LSI test (Leadership Style Inventory). (In the survey, it was the first version of the LSI test that was used. It differs in some ways from the LSI version II that is used today).

The result of the survey is shown below. 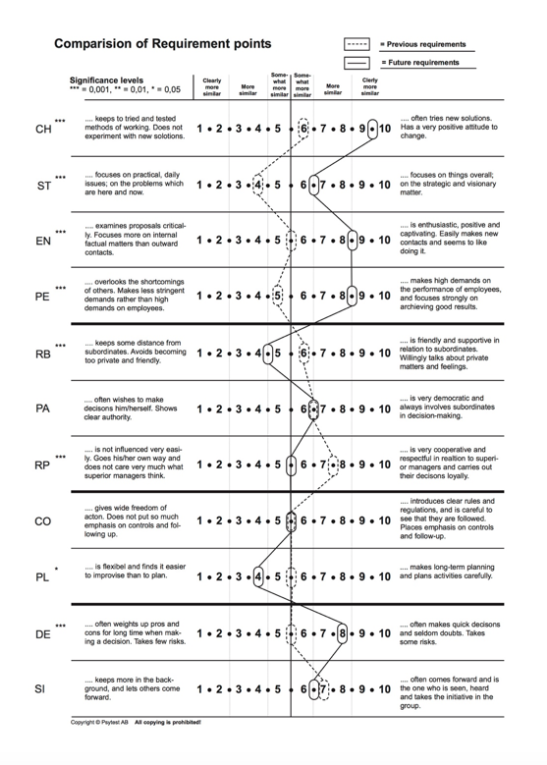 Significant differences between past and future demands also reflect increased demands for DE: Decisiveness, lower demands for RB: Relations subordinates and RP: Relations superiors and lower demands for PL: Planning (the latter is weakly significant). This means that if it was previously good to nurture warm and conflict-free relationships with superiors, follow plans and take great care of the relationships with subordinates, and exercise great care in decision making, it will be good in the future to be more courageous and to dare to make uncomfortable decisions and spend less time on planning.

What recommendations can be made for the recruitment and training of managers based on these results? The results indicate that if managers are to be prepared to deal with profound changes, they need more of a changeable attitude (CH). They need to transcend the daily routines (ST) and motivate employees with enthusiasm and self-esteem (EN). They also need to set higher performance requirements (PE). These are all aspects of a Changing leadership style. In addition, the results show that managers feel a need to be “tougher”: to confront conflicts and show greater determination/courage. These are, in any case, behavioral areas that many executives feel need to be strengthened, and it may be wise to develop them in managers if you know that the demands to make radical changes will be great in the future.

In terms of recruitment, these results (and also others) show that the Change leadership style and that the sub-scales CH: Change and EN: Enthusiasm are assets when there is a high demand to drive changes.  Even DE: Decisiveness can be an interesting scale to look at more closely.

During the autumn, Psytest AB will publish a number of survey results about leadership. The surveys are presented in more detail in a dissertation by Stefan Lindstam (see amazon.de, “The FSI Führungsstilinventar und das integrative Führungsmodell”, 2015). The dissertation is written in German, although it is based on Swedish surveys. In order to give readers easier access to these results, this article series consists of shortened and simplified presentations of selected survey results in English. The surveys are made by using the LSI Leadership Style Inventory Test. The underlying leadership style model is broad and general (compare the Big Five model within the personality field) and the conclusions are therefore generally relevant to people working in the field of management recruitment and leadership development. 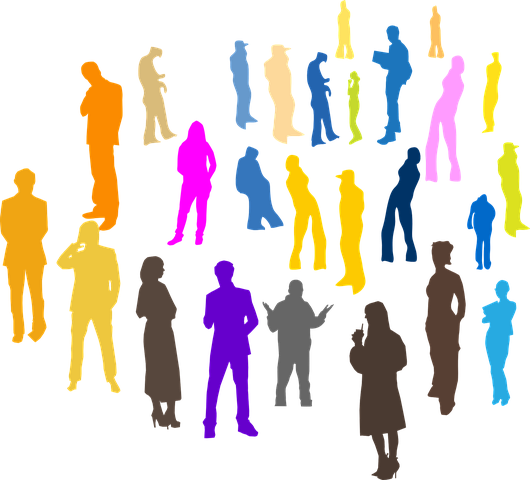 Differences in leadership styles of top managers and first-line managers

During the autumn, Psytest will publish a number of survey results about leadership. The surveys are presented in more detail in a dissertation by Stefan Lindstam (see amazon.de, “The FSI Führungsstilinventar und das integrative Führungsmodell”, 2015). The dissertation is written in German, although it is based on Swedish surveys. In order to give readers easier access to these results, this article series consists of shortened and simplified presentations of selected survey results in English. The surveys are made by using the LSI Leadership Style Inventory Test. The underlying leadership style model is broad and general (compare the Big Five model within the personality field) and the conclusions are therefore generally relevant to people working in the field of management recruitment and leadership development.

A brief description of the LSI test 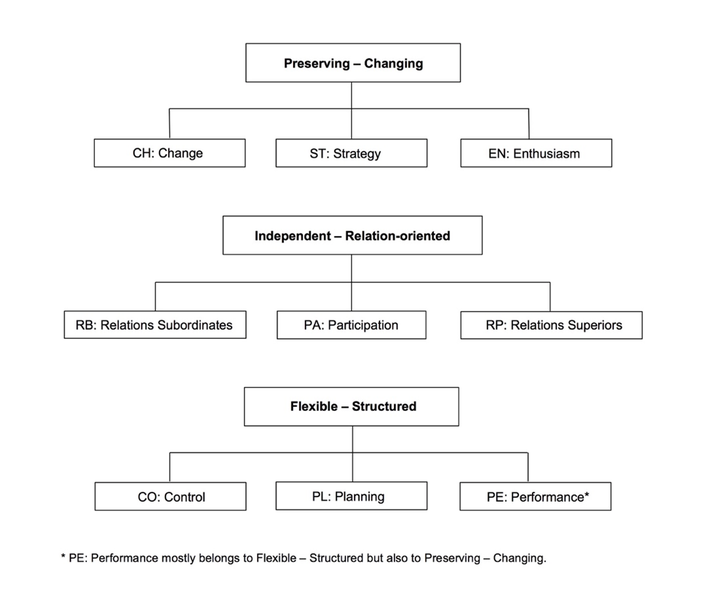 In addition to the scales specified so far, the test also provides scores on three so-called “additional scales.” These are BE: Decisiveness, SI: Social Impact and SM: Stress Management. Together, these three scales more generally refer to the motivation and self-confidence of leadership. 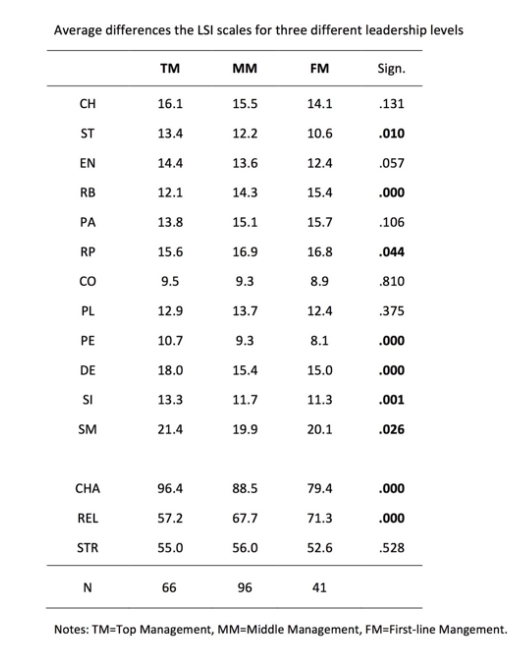 Regarding the three broad leadership style dimensions, the three groups differ because the higher the managerial level, the higher the average of the Change Dimension (CHA). The difference is highly significant and has also been shown previously in an independent survey. The results thus show that the higher the managerial level, the more change-oriented the leadership. This result was also expected since a top manager’s areas of responsibility are broader and usually require looking at a business from a cross-functional perspective. They also have a longer planning horizon and contribute to strategic discussions in the management team. First-line managers usually have a more operational focus.

The additional scales also distinguish between the groups in such a way that top managers get significantly higher values than mid-level managers and first-line managers, as was also expected, as motivation and confidence in leadership, on average, can be expected to grow with increasing management responsibility.

Less obvious is another difference between the managerial levels, which is also significant in two separate studies. It turns out that the higher the managerial level, the lower the Relationship dimension. That is, top managers describe themselves as having a more Independent leadership style. The top managers thus describe a leadership style that is characterized by a greater (professional) distance to employees, a stronger focus on the facts and a more independent and determined attitude about various issues. In first-line managers, however, one finds more focus on the relationships with both superiors and employees, helping and supporting employees who have problems, and establishing warm relationships.

If we look more closely at the Style and Additional Scales, top managers score significantly lower on RB: Relations Subordinates and RP: Relations Superiors. They score significantly higher on PE: Performance, DE: Decisiveness, SI: Social Impact, ST: Strategy and SM: Stress Management. For RP and SM, the tendency is not continuous. In a previous survey with only the categories “top managers” and “first-line managers,” the same scales significantly differentiated these groups. In addition, strategic thinking increases at higher management levels, so a more demanding (PE: Performance) and “tougher” leadership style (low RB and RP) seems to emerge.

One might conclude that top managers need different “social skills” than first-line managers. While first-line managers demonstrate leadership that is similar to common definitions of employee-oriented leadership (the manager gives attention, consideration and support to employees), it seems that top managers exhibit behaviors such as standing up for their opinions, thinking independently, adapting less to others and focusing more on the task and making demands on others. Thus, a “tougher” relationship management is shown, with emphasis on independence, setting requirements, and conflict-tolerance.

It can also be noted that there are no significant differences among the three groups in the Structural dimension (seen more in detail, it applies to the most central sub-scales CO: Control and PL: Planning).

Conclusions about recruitment and development of managers

The results suggest that while a more classical employee-oriented leadership can be developed in first-line managers, those who take further steps upward need to be prepared to keep others responsible for defined outcomes and to develop and defend their own ideas and opinions. In addition (of course), they need training to take a broader, more strategic perspective, to learn analysis models, to gather relevant information, to think more creatively, to develop more change-orientation, etc.

In terms of recruitment, this survey shows that top managers tend to be in the Changing and Independent direction (at least they do not usually get very high scores on the Relationship dimension) as well as on the Additional Scales. However, there is some influence from a manager’s function, which is listed in the section “Differences in Leadership Style for Different Functions.” The next article will first deal with leadership by restructuring. 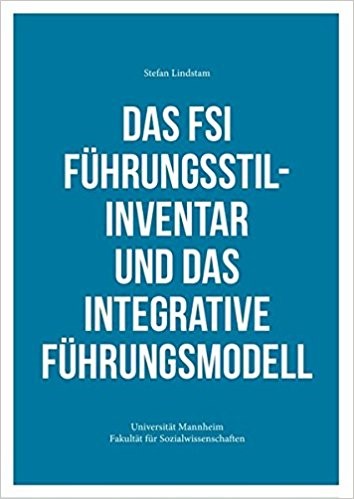